Big changes are on the horizon for both Bennett brothers. The Patriots are releasing tight end Martellus Bennett, according to Field Yates of ESPN.com (on Twitter). 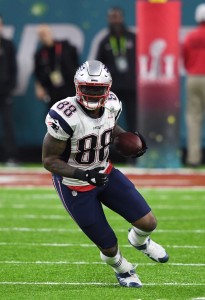 The move will create about $6MM in salary cap space for New England, bringing their total cap space up around $23MM. That flexibility is hugely important for the Pats as they explore new deals for tackle Nate Solder and wide receiver Danny Amendola.

Bennett was due a $2MM roster bonus on March 14, putting the Pats in a tough position. Although he is immensely talented, Bennett did very little for the Packers (who were burned on an expensive free agent deal) and Pats in 2017.

Bennett will garner plenty of attention on the open market, but questions persist about his commitment to football and his abrupt exit from New England. For his part, Bennett wants to continue playing in 2018.

Bennett, who turns 31 on Saturday, had a great year for the Patriots in 2016, tallying 55 receptions for 701 yards and seven touchdowns.