Could a reunion be on the horizon for the Saints and tight end Jimmy Graham? The Saints are expected to be among the teams with interest in Graham when free agency opens on March 14, according to Tom Pelissero of NFL.com (on Twitter). 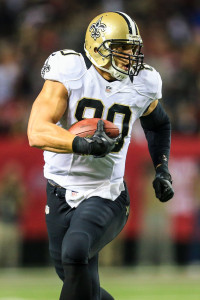 In line with what we’ve heard previously, Pelissero says that Graham is not expected to re-sign with the Seahawks this offseason. There should be plenty of opportunities out there for Graham, however, as he profiles as one of the top tight ends in this year’s class. Other big names include Eagles free agent Trey Burton (who should draw the most lucrative deal of any free agent TE) and Jets free agent Austin Seferian-Jenkins.

Over the last four years, Graham has been the league’s highest-paid tight end with average annual salary value of $10MM. He’ll make less on his next contract, but he figures to do well on a multi-year deal.

The Saints have tight ends Coby Fleener, Josh Hill, Michael Hoomanawanui, Garrett Griffin, Clay Harbor, and Alex Ellis on the roster, but finding a difference maker at tight end is one of the team’s top priorities. Going for a proven free agent such as Graham would make sense, but the Saints also met with some of the draft’s top tight end prospects at the combine last week and they could fill the void there.

“I think there are some players there,” GM Mickey Loomis said of this year’s tight end crop in the draft (via Herbie Teope of the Times Picayune). “I think there’s a good group of players, and so how they fit us, I think that remains to be determined yet. I think, in general, this is going to be a decent draft class.”

Graham, 32 in November, was among the league’s best tight ends while with New Orleans. From 2011-2014, Graham averaged 89 catches for 1,099 yards and 12 touchdowns per season. He earned back-to-back Pro Bowl nods in his two most recent seasons with the Saints, but his production has not been quite the same.

One comment on “Saints Expected To Target Jimmy Graham”