It’s not necessarily likely to happen, but Seahawks GM John Schneider is not ruling out a trade of safety Earl Thomas. On Monday, Schneider indicated that the phone lines are open in Seattle, meaning that no one is off limits. 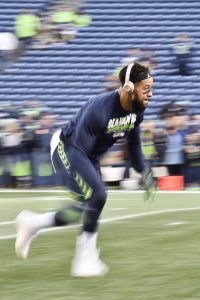 “Earl’s under contract for another season, and if we’re not listening to everybody we are not doing a very good job. So we have to listen to everything that’s going on all the time,” Schneider said (Twitter link via Bob Condotta of The Seattle Times).

Thomas says that he wants to stay in Seattle, but the six-time Pro Bowler is entering the final year of his four-year $40MM deal and the Seahawks could garner tons of draft capital by trading him. Reportedly, the Seahawks are seeking a first round pick and a third rounder for Thomas and they could potentially get even more than that.

The Cowboys are reportedly one of the teams that have shown interest in trading for Thomas, but you can expect a number of clubs to inquire on acquiring the elite safety.