The Patriots have picked up another first-round pick thanks to the Brandin Cooks trade, leading to speculation that they could parlay their draft capital into a trade for Odell Beckham Jr. The word, for now, is that will not be happening. The Cooks deal is not a precursor to an attempt to land Beckham, Jason La Canfora of CBSSports.com hears (on Twitter). 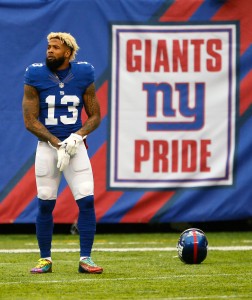 The Giants are seeking at least two first-round picks for Beckham and the Patriots now have selections at No. 23 and No. 31 in the current draft to work with. However, the Patriots are believed to have traded Cooks in part because he is entering his contract year. Trading for Beckham Jr. would put the Patriots in an even more expensive predicament than they were facing with Cooks, not to mention the sacrifice of serious draft value.

Beckham, 26 in November, was among the game’s most spectacular wide receivers up until an injury cut his 2017 season short. In 2016, OBJ had 101 catches for 1,367 yards and ten touchdowns en route to his third career Pro Bowl selection. He’d be exceptionally dangerous in the Patriots’ offense, but it sounds like that dream scenario won’t be coming to fruition.