Some fifth-year option decisions are easier than others. On Tuesday, the Rams finalized a couple of no-brainer calls. The Rams will exercise their fifth-year options on running back Todd Gurley and cornerback Marcus Peters, according to NFL.com’s Ian Rapoport (on Twitter). 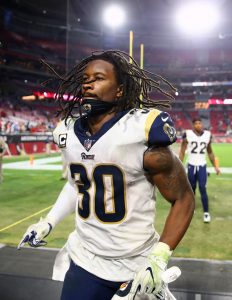 Gurley, the No. 10 overall pick in the 2015 draft, set new career highs in 2017 as he ran for 1,305 yards with a league-leading 13 rushing touchdowns. He also set new personal watermarks with 64 catches and 788 yards with six receiving TDs. The decision to keep him under contract for 2019 was an easy one, but the eventual discussions on a new long-term deal could be tricky. The Rams will have to address the contracts of several other key players – including Peters and defensive tackle Aaron Donald – and Gurley will command a whopping asking price, particularly if Steelers star Le’Veon Bell secures the mammoth contract he is seeking.

The Rams acquired Peters in February from the Chiefs in February in exchange for second- and fourth-round draft picks. Peters is one of the most talented young cornerbacks in the NFL, but a personality clash led to his exit from KC. The Rams, presumably, will want to see how Peters meshes with the coaching staff before discussing a long-term contract. For now, the Rams have Peters under contract through 2019 with the option to bail for any non-injury reason.

8 comments on “Rams Pick Up Options For Gurley, Peters”