The Seahawks made plans to audition Colin Kaepernick this week, but the trip has been postponed, Adam Schefter of ESPN.com tweets. The workout has been pushed off after Kaepernick declined to stop kneeling during the national anthem next season. 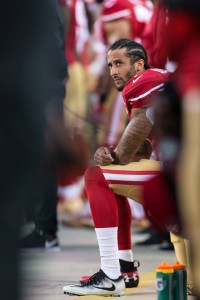 Kaepernick did not decline to stop kneeling, per se, according to Ian Rapoport of NFL.com (on Twitter). Apparently, the team “asked for his plan moving forward on how to handle everything and there was not a firm plan.” The Seahawks also have concerns about Kaepernick’s overall commitment to football, Bob Condotta of The Seattle Times hears. Still, the Seahawks have not closed the door on signing Kaepernick.

Coach Pete Carroll & Co. also showed interest in Kaepernick last offseason during the height of his anthem protest controversy. Seattle ultimately chose journeyman Austin Davis as their backup quarterback, perhaps because of public relations fears. Depending on who you ask, Kaepernick’s salary expectations may have also been a factor.

Kaepernick, of course, is presently embroiled in a collusion suit filed against the league. Kaepernick’s attorneys have deposed a number of owners and executives and, on Tuesday, NFL lawyers responded by deposing Kaepernick himself. Depositions are done behind closed doors, but it is believed that he was asked about whether he expected to be signed as a starter last season, the kind of money he was seeking, and whether his injury history had deteriorated his skills.

It’s unclear how the Seahawks’ latest invitation to work out – and postponement of that audition – may affect his case.