Seabass in Seattle. On Friday, the Seahawks formally signed kicker Sebastian Janikowski. It’s a one-year deal, according to ESPN.com’s Adam Schefter (on Twitter). 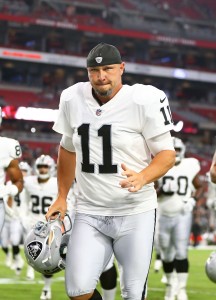 Janikowski, 40, was let go by the Raiders in February as they elected to move forward with Giorgio Tavecchio. He left Oakland as one of the most well-known figures in franchise history – and also with a chip on his shoulder. Janikowski took his first visit with the rival Chargers before huddling up with the Seahawks this week.

Janikowski set Raiders records with 268 regular season games played and 1,799 points scored. Meanwhile, he has the most field goals from 50+ yards in NFL history with 55. Janikowski did not see the field in 2017 thanks to a back injury, but his agent says that he is now healthy and ready to get back to his old form.

The team’s press release indicates that Janikowski will not simply be handed the top job. Jason Myers signed a reserve/futures contract with the Seahawks earlier this offseason and the two will be “competing for” the gig, per the Seahawks’ website. The Seahawks are hoping that either Janikowski or Myers will provide them with a stable leg following Blair Walsh’s struggles in 2017.