Willie Snead is officially a member of the Ravens. The Saints informed the wide receiver on Monday morning that they will not be matching his offer sheet (Twitter link via ESPN.com’s Adam Schefter). 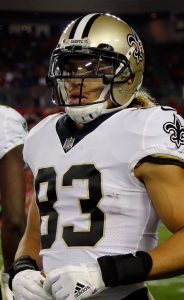 The Saints used the low level tender on Snead this offseason, which tagged him with only a one-year, $1.907MM placeholder. The move came as something of a surprise, but the Saints did not want to pay him upwards of $2.9MM via the second round tender after a forgettable 2017.

Right at the deadline for restricted free agents, the Ravens inked Snead to a two-year, $7MM offer sheet with another $3.4MM in incentives. After the Saints signed an RFA wide receiver of their own in Cameron Meredith, there was no real scenario in which they would have matched.

The Ravens upgraded their wide receiver stable by adding Michael Crabtree and John Brown in March. They were expected to target a WR3 type in the draft this weekend, but the addition of Snead will allow them to prioritize other areas of need.

Snead virtually disappeared from the Saints’ offense last year, but he averaged 70 catches for 940 yards and four touchdowns between 2015 and 2016. He won’t turn 26 until October, so the Ravens see serious potential in the former UDFA.