Former 49ers teammates Colin Kaepernick and Eric Reid are training together as they look to get back into the NFL, Cam Inman of the Bay Area News Group writes. The duo was spotted working out at Cal State East Bay, but declined to offer specifics on their plans. 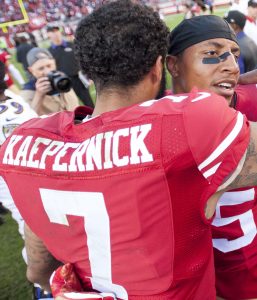 “We’re not doing interviews,” Kaepernick said. “We’re just here getting in a workout.”

From a talent perspective, both players should be rostered by NFL teams. However, their participation in anthem protests has apparently kept them from finding employment. Kaepernick, of course, sat out the entire 2017 season without drawing a concrete offer. Reid, meanwhile, has garnered very little interest this offseason outside of a meeting with the Bengals. The Bengals asked Reid about his plans regarding the anthem in 2018 and did not offer him a deal, prompting him to follow Kaepernick in his collusion grievance against the league. This week, the NFLPA backed the safety in his case.

Reid, 26, has made 69 starts in his career. The 49ers experimented with using him at linebacker at times, but the bulk of his work has come at safety since being taken in the first round of the 2013 draft.