Bryant: No Regrets On Turning Down Ravens

After being released by the Cowboys, wide receiver Dez Bryant turned down a reported three-year deal worth roughly $21MM from the Ravens, choosing instead to wait for a similarly lucrative one-year offer. So far, that offer hasn’t come through, but Bryant claims that he doesn’t regret that decision “one bit” (Twitter link). 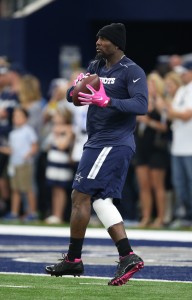 Bryant may not see it this way, but it sure looks like he missed the boat on his best possible deal. While the Ravens were willing to give him an average annual value of $7MM to match free agent acquisition Michael Crabtree, many teams are unwilling to consider him for even the league minimum.

It’s anyone’s guess as to where Bryant will land at this point in the offseason. As recently noted by our own Dallas Robinson, the Cardinals, Packers, Patriots, Redskins, and Seahawks would all make varying degrees of sense for the multiple time Pro Bowler. However, we’ve heard no real news of Bryant being connected to any club since his talks with the Ravens and the Packers are not engaged with him at this time.

Last year, Bryant recorded just 838 yards and six touchdowns off of 69 catches, a far cry from his average of 91 catches for 1,312 yards and 14 touchdowns from 2012-14. His dip in production and perceived locker room issues have been serious barriers towards his pursuit of a platform contract, but he says that he will suit up for a team no matter what.

“No, I’m not retiring,” Bryant wrote on Twitter. “For the record, me not being signed to a team yet has a lot to do with my personal decisions. This media [sic] is a joke.”

11 comments on “Bryant: No Regrets On Turning Down Ravens”