Ereck Flowers remains in south Florida training independently from the Giants, and teammate Landon Collins didn’t mince words when asked why the fourth-year tackle wasn’t with the team.

“He’s just unhappy that they picked up [Nate Solder],” Collins said during an appearance on WFAN (via SNY.tv). “That’s it.”

The Giants signed Solder to a landmark deal and gave him Flowers’ position, subsequently shuttling the disappointing former top-10 pick to right tackle. While right tackle was where the Giants drafted Flowers to play initially, he’s started three straight seasons on the left side. Only, the last one ended acrimoniously. And the Miami product has been on the trade block. 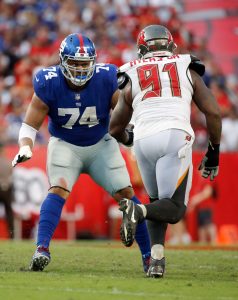 With Big Blue unable to swing a trade for Flowers during the draft, he remains on the roster. The Giants do not have immediate plans to waive Flowers.

Dave Gettleman has attempted to shake up the team’s embattled offensive line, signing Solder and Patrick Omameh and following those additions up with a second-round selection of Will Hernandez. Flowers, nonetheless, now plays a position at which the Giants are otherwise understaffed. Second-year UDFA Chad Wheeler (five starts last season) represents Flowers’ primary competition on the right side.

Pat Shurmur believed Flowers and he were on the same page regarding the position change, SNY.tv’s Ralph Vacchiano notes, but he’s the only Giant that’s been away from the team during the offseason period thus far. And he didn’t let the team know he’d be working out in Miami instead.

“Definitely, I would say he needs to be here, as a teammate and as a captain because we need him here, need to get the line together so they can be on the same page,” Collins said. “… Ereck is my boy. At the same time, he has a lot to learn, and at the same time he has to work harder.

“He came in last year, he thought he did what he needed to do — he lost weight, he was in proper shape, thought he played good in the first couple of games and just kind of went downhill when the season went downhill.”

The Giants passed on Flowers’ fifth-year option, and although the edge blocker cannot be fined for missing Giants offseason work until June’s minicamp, time could be running out for this relationship.