Jeff Fisher has been out of the coaching world since being fired by the Rams in 2016. Apparently, he has had opportunities to come back to the sidelines as an assistant coach, but he is holding out for another head coaching gig. 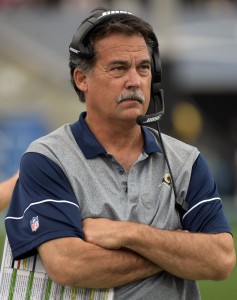 “I’ve had opportunities to stay in it, but I don’t see myself coming back and coordinating,” Fisher told SiriusXM. “As we all know, success in the National Football League is built on a number of different things. And it starts with the quarterback and you’ve got to stay healthy and you’ve got to hit things running and you’ve got to have a good staff, all those things. So getting out for a year or two, I don’t think that should, by any teams, eliminate somebody.”

You can never say never on Fisher’s candidacy, but he would not be the most exciting hire for a team. Fisher has had five 8-8 seasons and four 7-9 seasons (plus one 7-8-1 campaign) as head coach, numbers that have largely overshadowed his success in Tennessee. In his nearly five year run with the Rams, Fisher went 31-45-1 with no playoff appearances.

Fisher says that he has been contacted by networks for broadcasting opportunities over the last couple of years, but he declined because he did not believe that former rivals like Seahawks coach Pete Carroll would give him information in pre-production meetings. But, if Fisher does not get the head coaching opportunity he’s after, he says he’ll reconsider television.

Fisher, who has the 12th-most wins in NFL history, celebrated his 60th birthday this past winter.

16 comments on “Latest On Jeff Fisher”