The Raiders won’t be meeting with Brian Cushing after all. After agreeing to terms with fellow veteran ‘backer Derrick Johnson, the Raiders have called off their scheduled Sunday summit with Cushing, Adam Schefter of ESPN.com tweets. 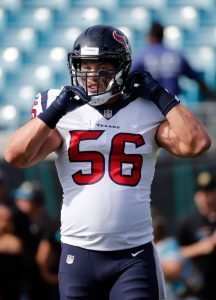 Initially, it appeared that Cushing would join a revamped linebacker group that includes newcomers Johnson, Emmanuel Lamur, and Tahir Whitehead. That would have been quite a crowd, however, especially since holdovers Cory James, Bruce Irvin, Shilique Calhoun, and Nicholas Morrow are also under contract.

Cushing’s March meeting with the Seahawks appears to be the only visit he’s taken thus far in free agency. With the Oakland visit 86’d, his reps will continue to scour the market for other options.