The Browns have agreed to a deal with veteran linebacker Mychal Kendricks, according to his agent, Doug Hendrickson (on Twitter). Kendricks and the Browns agreed to a one-year, $3.5 MM pact, per Mary Kay Cabot of Cleveland.com. 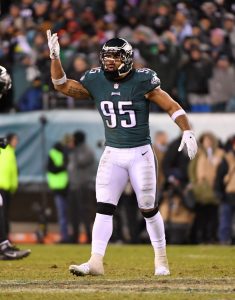 Kendricks was released by the Eagles last month after reportedly refusing to take a pay cut of $4.5MM. He has spent the last six seasons with the Eagles and visited with the Vikings and Raiders, along with the Browns. The Eagles took Kendricks in the second round of the 2012 draft. Kendricks’ brother, Eric, was a second-round choice of the Vikings in 2015 as a linebacker as well.

The 27-year-old is expected to report to the Browns’ OTAs on Tuesday, per Cabot. He’ll compete for a starting spot in the 4-3 scheme of Browns defensive coordinator Gregg Williams, with 2017 Pro-Bowler Joe Schobert, Jamie Collins and Christian Kirksey. Jordan Schultz of Yahoo Sports reported late last week that Kendricks was expected to immediately assume a starting role with the Browns.

Kendricks appeared in 15 games last season, starting 13, and racked up 75 tackles. He also logged 16 tackles in the postseason amid the Eagles’ run to their first-ever Super Bowl title. Pro Football Focus rated Kendricks as the No. 9 linebacker in the NFL.

The Eagles had shopped Kendricks around before his May release but were unable to move him during or prior to the draft. Kendricks had also requested a trade in the 2016 offseason after diminished playing time in 2015 and ’16 but was pressed into action last season after a season-ending Achilles injury to Jordan Hicks.