Ronald Jones is officially under contract with the Buccaneers. On Thursday, the Bucs announced that the second-round pick out of USC has signed his deal. With that, the Bucs have officially locked up their entire draft class. 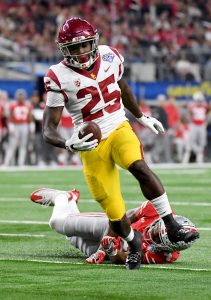 Heading into the draft, some believed that Jones would be a first-round selection. However, he did not help his cause with a poor showing at the Trojans’ pro day. The Bucs, meanwhile, believe that they have a sleeper on their hands after grabbing Jones with the No. 38 overall pick.

Last season, Jones racked up 1,550 rushing yards and 20 total touchdowns in his final collegiate campaign. There are some concerns about Jones’ ability to handle a big workload, but the Bucs will be able to limit his usage thanks to the presence of Peyton Barber, Jacquizz Rodgers, and Charles Sims.

Here’s the complete rundown of the Bucs’ 2018 draft class, via PFR’s draft tracker: