Dez Bryant likely won’t sign with a club before training camp begins in July, Ian Rapoport of NFL.com (on Twitter) hears. Rapoport is told the wide receiver has received plenty of interest, but he’s staying patient until he finds the right opportunity. 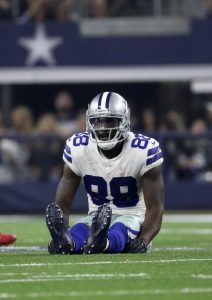 The right opportunity, for Bryant, means a winning club with the right offense that will give him a one-year prove-it deal. Bryant has been unable to find the one-year deal he is seeking after rejecting a three-year, $21MM offer from the Ravens.

Rapoport’s report indicates that there is in fact a decent market for Bryant. Previously, ESPN.com’s Adam Schefter heard that many teams were unwilling to consider the veteran, even at the league’s minimum salary.

Right now, it’s hard to say where Bryant will land. He has lobbied for the 49ers to sign him, but there has been no word of interest from SF. The Bills and Packers, meanwhile, do not appear to have him on the radar, despite the belief of some that he would be a logical fit. As Rapoport notes, a wide receiver injury in practice could open up a door somewhere for Bryant.

Bryant’s dropoff in performance is certainly a factor in his unemployment, but the perception that he has been difficult in the locker room is probably also a barrier to a deal. Even in a down 2017, Bryant managed 69 catches for 838 yards and six touchdowns.

11 comments on “Dez Bryant Unlikely To Sign Until July”