No Movement On Earl Thomas To Cowboys

Safety Earl Thomas announced that he will not be attending the Seahawks’ mandatory minicamp as he pressures the team for a new contract. Right now, it doesn’t sound like that situation will result in a trade to the Cowboys. There hasn’t been much discussion on a trade to send Thomas to Dallas since the draft, Josina Anderson of ESPN.com tweets. 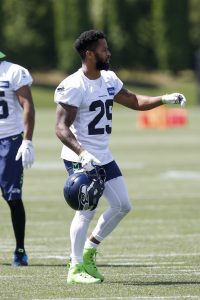 There were rumblings this offseason that the Seahawks could move Thomas, but coach Pete Carroll shot that down in April when he indicated the team was planning on keeping Thomas. GM John Schneider admitted that a trade was considered at one point, but also said that “nothing was remotely close to happening” in the spring.

Meanwhile, in May, it was said that there was no movement on a new deal for Thomas. At this point, something has to give. Thomas will either have to play out his final year at a salary of $8.5MM, or the Seahawks will have to give him an extension to put him at or near the top of his position group. Making him the highest-paid safety in the league would mean leapfrogging Eric Berry‘s mammoth six-year, $78MM deal.

When Thomas signed his four-year, $40MM extension with the Seahawks in 2014, he was the highest-paid safety in the NFL. Since then, he has been topped by five others: Berry, teammate Kam Chancellor, Reshad Jones (Dolphins), Lamarcus Joyner (Rams), and Harrison Smith (Vikings).

3 comments on “No Movement On Earl Thomas To Cowboys”