The Cowboys and Pro Bowl guard Zack Martin finalized the terms of his new contract on Wednesday, as Adam Schefter of ESPN.com tweets. As previously reported, it’s a six-year deal that will keep him in the fold through 2024. The new portion of the contract is worth a whopping $84MM with $40MM guaranteed. 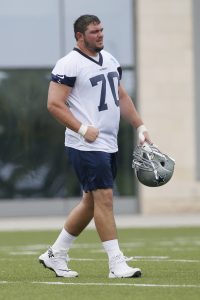 The new pact makes Martin the new highest-paid guard in the NFL as his $14MM/year tops Andrew Norwell‘s $13.3MM annual average value. Among offensive linemen, only Giants tackle Nate Solder has a higher per year average at $15.5MM. It’s a sign that the guard market is nipping at the heels of the tackle market and also an indication of just how valuable Martin is Dallas’ front five. His total guarantee is also the highest of any guard in the NFL.

Martin’s streak of 64 consecutive starts is the longest active streak by a guard in the entire league. Martin is also one of just four offensive linemen earn Pro Bowl selections in each of their first four NFL seasons since 1970 (Twitter link via ESPN).