The Lions have acquired outside linebacker Eli Harold from the 49ers, a source tells Kyle Meinke of MLive Media Group (on Twitter). San Francisco will receive a conditional 2020 seventh-round pick in the trade. 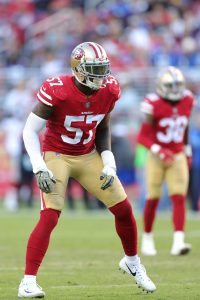 Harold has to be on Lions’ roster for four weeks in order for the pick to be conveyed to the 49ers, Adam Schefter of ESPN.com (on Twitter) hears. So, if Harold doesn’t make the final cut on Sept 1 – or doesn’t last until the Lions’ Week 3 contest against the Patriots – the Niners will get nothing in return.

Harold, a third round pick in the 2015 draft, has played in all possible 48 games since entering the league. He started ten games last year and seemed to be in the mix for a starting job this year before the trade. Without Harold, Dekoda Watson is likely to start at outside linebacker in San Francisco with Pita Taumoepenu as his primary backup.

In Detroit, Harold will compete for an OLB job in support of presumptive starters Devon Kennard and Christian Jones. The Lions have yet to record a sack through two exhibition games, so they’re open to making changes in the front seven.

For some, Harold may be best known for his anthem protests, but he has been standing for the anthem so far in the preseason.