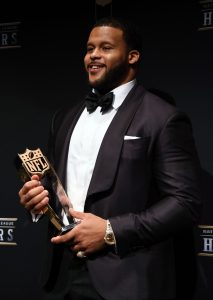 Addressing the Aaron Donald situation, the second-year Rams HC said (via ESPN.com’s Lindsay Thiry, on Twitter), “We are very optimistic. Seriously, we are.” McVay said a lot has changed the past few days on this front and believes the finish line is finally in sight, per Vincent Bonsignore of The Athletic (on Twitter).

The Rams are prepared to finalize this deal soon, with the end of this week being a reasonable target date, Bonsignore tweets. He adds the drama no longer centers around the prospect of the Rams refusing to meet Donald’s demands. Instead, the suspense here will be this contract’s numbers and how far in front of other NFL defenders they will be.

As Khalil Mack‘s talks with the Raiders remain at a standstill, Donald steam’s picked up to the point he appears likely to be with the Rams when they face the Raiders in Week 1. He missed the first two games last season because of a holdout but still earned defensive player of the year acclaim. Nothing’s emerged indicating a Mack deal is imminent, but it’s possible the Donald saga concluding will help bridge the gap between the 2016 defensive player of the year and his team.

2 comments on “Finish Line In Sight For Rams, Aaron Donald?”