The injury settlement for Jordan Matthews with the Patriots carries no cap amount associated with it, as Field Yates of ESPN.com tweets. That may be an indication he’ll be healthy in time for the start of the regular season. 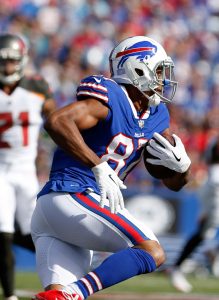 The Patriots released Matthews after he tweaked his hamstring in practice. Given his potential, it was speculated that Matthews’ injury was rather serious, but that might not be the case at all. After being officially released from IR on Tuesday, Matthews is free to sign with any club, and it might not be long before he can actually audition for teams.

Dez Bryant is the free agent wide receiver everyone is talking about, but Matthews is four years younger and arguably has more upside. Once healthy, Matthews could hold appeal for teams like the Browns who are looking to shore up their depth at wide receiver.

Injuries limited Matthews to ten games and just 282 yards last year, but he’s not far removed from impressive production with the Eagles. Matthews nearly hit 1,000 yards receiving in 2015 and had a respectable 73/804/3 line in 2016.