The Patriots reworked tight end Rob Gronkowski’s contract, agent Drew Rosenhaus tells Adam Schefter of ESPN.com (on Twitter). The revised contract will potentially give Gronk an additional $4.3MM this year via $1MM in per game bonuses and $3.3MM in incentives. All in all, the maximum value of Gronk’s 2018 season is now worth $13.05MM. 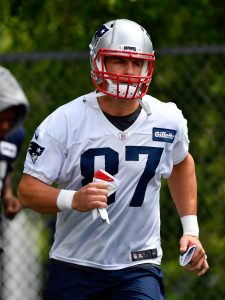 The incentive structure gives Gronkowski an opportunity to earn $1.1MM for four different milestones, though he will be maxed out after achieving three of them. If Gronkowski achieves three of the following plateaus, he’ll realize the full value of his $3.3MM incentives package:

The revision is similar to the settlement reached last year between the Patriots and Gronkowski. It’s also reminiscent of the compromise the Patriots made earlier this offseason with Tom Brady.

Last year, Gronk’s deal was improved to give him a base salary of $5.25MM with opportunities to earn incentives at three different levels. With a First-Team All-Pro selection, Gronk maxed out his bonus package at $10.75MM.

Gronk was already in line for the highest cap number of any tight end in the league this year. The new pact puts even more distance between him and Redskins standout Jordan Reed ($10.143MM cap number).

In 2017, Gronk was on the field for 14 games, and managed 69 receptions, 1,084 yards, and eight touchdowns, all of which placed him within the top five among tight ends. When healthy, he is the most fearsome offensive weapon at his position and among the most dynamic talents in the game.

The new contract should keep Gronkowski satisfied for a little while. In 2019, when Gronk is entering the final year of his deal at a $12MM cap number, the Patriots may be forced to give him an extension that puts him closer to market value.