Jeremy Maclin Close To Being Healthy

Free agent wide receiver Jeremy Maclin is close to being healthy after suffering a hamstring/glute injury in training, Mike Garafolo of NFL.com (on Twitter) hears. Garafolo expects Maclin to have some workouts and visits soon as teams have been keeping tabs on his situation. 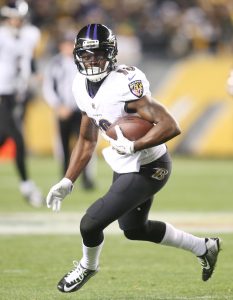 Maclin had offers in hand before NFL training camps began, but he was waiting for the “right opportunity” before signing. The Eagles had Maclin on their radar at one point, but it remains to be seen whether they’ll still have interest after turning back the clock with Jordan Matthews.

Maclin, 30, was a dynamic deep threat for the Eagles as he averaged nearly 1,000 receiving yards per season in Philadelphia, including a 1,300+ yard showing in 2014. He topped 1,000 yards in his first season with the Chiefs in 2015, but his production fell off over the last two years. Between those campaigns with the Chiefs and Ravens, Maclin played in just 24 total games and averaged only 42 receptions, 488 yards, and 2.5 touchdowns per year.

The veteran could find employment once he hits the workout circuit, though he’ll probably have to settle for something close to the league minimum.

3 comments on “Jeremy Maclin Close To Being Healthy”