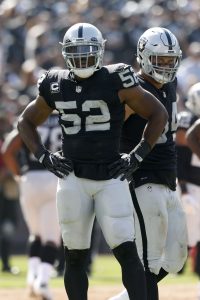 While Gruden said (via the Las Vegas Review-Journal’s Michael Gehlken, on Twitter) he was not involved in the daily communications between Mack’s agent and the team, he did indicate Carr’s $25MM-AAV contract — one the quarterback signed in hopes of leaving his team enough money to take care of teammates’ deals down the road — made it difficult to complete a Mack extension. And the Raiders weren’t particularly close on terms with their former superstar defender.

The Bears gave Mack a six-year, $141MM contract with $90MM in guarantees — raising the bar for defenders after Aaron Donald did so previously. Gruden confirmed (per Scott Bair of NBC Sports Bay Area, on Twitter) the Raiders made an offer, and it was “not anywhere close” to the terms Mack received from the Bears.

Gruden said the 27-year-old phenom was part of why he accepted Mark Davis‘ offer to return to coach the Raiders, per Tom Pelissero of NFL.com (on Twitter), but added the $90MM in guarantees was something the Raiders “could not do.” Rumors about the Raiders’ wherewithal to authorize such a guarantee surfaced late in the offseason, but nothing concrete emerged about Davis’ ability to construct a Mack extension. But it’s clear the Raiders were not willing to venture into the financial neighborhood the Bears were.

As for pulling the trigger on a trade now, when Mack was attached to a $13MM-plus fifth-year option and could have been franchise-tagged in the future, Gruden said he did not believe Mack was going to report and it was “time to move on.” Additionally, the Bears’ “unique” offer prompted the Raiders to make the deal, with the 55-year-old head coach adding there was no guarantee a proposal including two first-round picks would’ve been on the table in 2019 (Twitter links via The Athletic’s Vic Tafur).

The Raiders received interest from several teams on the Mack front — the Jets, 49ers and Browns are the known suitors who didn’t match the Bears’ haul — and ended up giving the Bears a second-round pick in the deal. Gruden said, via Adam Schefter of ESPN.com (Twitter link), he was not part of the discussion that sent a future Day 2 pick to the Bears.

With Gruden having cut or traded several of Reggie McKenzie‘s recent draft picks in recent weeks, and having criticized the 2015-17 classes during training camp — and on Sunday (Twitter link via Gehlken) — some understandable discord may be taking place in Oakland. Some around the NFL did not expect the Gruden-McKenzie partnership, one that featured Gruden siphoning much of the GM’s power, to last, Jason La Canfora of CBS Sports tweets. However, Gruden said the Raiders came to this Mack decision “as an organization,” per Gehlken (on Twitter).