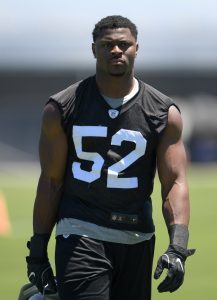 Furthermore,NFL.com’s Ian Rapoport Rapoport adds (via Twitter) that the Bears have permission to negotiate a long-term deal with Mack. They’re expected to ink him to a deal that would eclipse the record-breaking deal that Aaron Donald signed with the Rams yesterday.

We heard late last night that the chances of a Mack deal were “very real,” with the Jets and Browns among the teams connected to the defensive end (SNY’s Ralph Vacchiano confirms that the Jets called about Mack). However, it sounds like there was a difference in opinions among the Raiders staff, with owner Mark Davis apparently in support of keeping the disgruntled 27-year-old. On the flip side, head coach Jon Gruden was “far more open” to the idea, believing the financial commitment would be far better used on multiple players (via SI’s Michael Silver on Twitter).

NFL.com’s Tom Pelissero tweets that several potential suitors dropped out of the sweepstakes last night as the Bears seemingly ramped up their pursuit, with the Raiders telling other teams that they had at least two first-rounders on the table. Rapoport tweets that the reported asking price was two firsts and a player, a price that only Chicago was willing to pay.

Mack was engaged in a contract dispute with Oakland throughout the preseason, and it was expected to last into the regular season. One of the NFL’s best pass-rushers, Mack is scheduled to earn $13.846MM in 2018 before hitting free agency next spring. If Chicago is going to make him the highest-paid defender in the NFL, then the contract would need to exceed the deal that Donald signed with the Rams yesterday. That contract is worth $135MM, including $87MM in rolling guarantees. The deal represents the richest defensive deal in NFL history.

Mack has been a wrecking ball since entering the league as a first-round pick in 2014. A three-time Pro Bowler and two-time first-team All-Pro, Mack has totaled 40.5 sacks over his first four NFL seasons. In 2017, Pro Football Focus graded Mack as the NFL’s seventh-best edge defender. A deal for Mack certainly indicates that the Bears are ready to win now, as no team would give up such a haul if they weren’t eyeing the playoffs. Mack will slide into the starting lineup alongside either Akiem Hicks or Jonathan Bullard.