Finally, it’s a done deal. On Friday, the Rams signed defensive tackle Aaron Donald to a historic six-year extension that will keep him in place through the 2024 season. Donald signed the contract Friday afternoon. 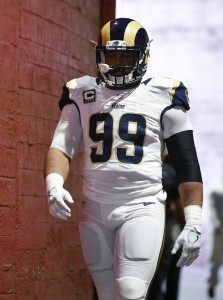 The new deal is worth $135MM, according to Adam Schefter of ESPN.com (on Twitter), and includes $87MM in rolling guarantees. Donald’s signing bonus is worth a whopping $40MM (Twitter link via Ian Rapoport of NFL.com) and he’ll receive $50MM fully guaranteed (Twitter link via Albert Breer of The MMQB). The deal represents the richest defensive deal in NFL history and ties Donald to Los Angeles for the next seven years.

Donald stayed away from the Rams this summer in order to boost his leverage in talks, creating doubt about whether he’d be in uniform for the start of the season. With the deal, the Rams have assured that he’ll be in the lineup for the team’s Monday night opener against the Raiders.

Donald has been one of the league’s most fearsome defenders since entering the league as the No. 13 overall pick in 2014. Over the years, he has racked up numerous accolades and a shocking number of sacks from the interior. The Associated Press named Donald its Defensive Rookie of the Year in ’14 and, last year, he earned his first AP Defensive Player of the Year award.

In 14 games last year, Donald amassed 11 sacks, five fourced fumbles, and led the league with 91 quarterback pressures, which is perhaps the best metric by which to judge a pass rusher. The Rams made a number of splashy moves on defense this offseason, but this massive new deal with Donald may be the biggest of them all.