Former Colts⁠ ⁠defensive end Tarell Basham was claimed off waivers by the Jets, according to Ian Rapoport of NFL.com (on Twitter)⁠. Basham, a 2017 third-round pick, will have an opportunity to turn his career around in a new setting. 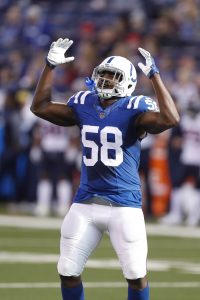 Basham suited up for 15 games in 2017, but made zero starts. He recorded two sacks and forced a fumble as a rookie, but only made seven tackles overall. This year, he played in just one of Indianapolis’ four games, so his release was surprising, but not altogether shocking.

The Colts probably wanted to sneak Basham through waivers and on to their practice squad, but that was an unlikely outcome given Basham’s pedigree. In his four years at the University of Ohio, Basham registered 27 sacks and was named the Mid-American Conference Defensive Player of the Year as a senior.

The Jets’ pass rush could certainly use a talent infusion, so Basham has a fairly easy path to the field if he performs well in practice. The Jets are currently starting Leonard Williams and Henry Anderson at defensive end with Jordan Jenkins and Brandon Copeland at the outside linebacker spots after placing Josh Martin on IR.