The Raiders have wide receiver Amari Cooper on the trade block and they are seeking more for him than you might expect. The Raiders are seeking a first-round selection in exchange for the former No. 4 overall pick, Ian Rapoport of NFL.com (video link) hears. 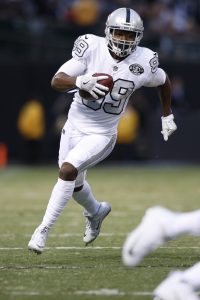 Cooper’s talent is undeniable, but his performance has been inconsistent for the past two seasons and some have questioned his work ethic. Cooper earned back-to-back Pro Bowl nods in his first two NFL seasons, but it’s hard to see another club sacrificing a first-round pick for him at this point. If the Raiders want to move Cooper between now and the Oct. 30 deadline, the Raiders will have to slash their asking price.

Through six games this season, Cooper has 22 grabs for 280 yards and one touchdown. That comes after Cooper had just 48 catches for 680 yards last year, though he also had a career-high seven TDs.

Cooper isn’t the only Raider on the block. The Raiders are also willing to trade 2016 first-round pick Karl Joseph and veteran Derrick Johnson and they could even explore trading quarterback Derek Carr. Trading Carr and/or Cooper would be incredibly aggressive, but nothing can be ruled out in Oakland after the club shipped Khalil Mack to the Bears just prior to the season opener.