The Steelers have placed safety Nat Berhe on injured reserve with a pectoral injury, according to a team announcement. To fill his spot on the roster, the Steelers have promoted cornerback Brian Allen from the practice squad. 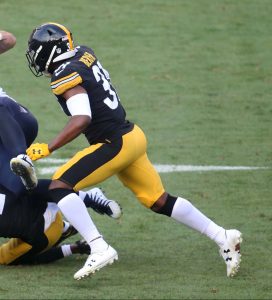 Berhe joined the Steelers as a free agent in April after spending the early part of his career with the Giants. At the time, the move was something of a head-scratcher since big-name safeties like Eric Reid, Kenny Vaccaro, Tre Boston, T.J. Ward, Tyvon Branch, Darius Butler, and former Steeler Mike Mitchell were still available, but the Steelers valued his special teams play and likely saw him as a value add. After four games and two total tackles, Berhe’s 2018 season is likely over.

Allen, the team’s fifth-round draft pick in the 2017 draft, played in ten games last season and had two special teams tackles. He also played in the Steelers postseason game against the Jaguars.