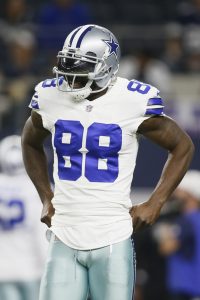 Bryant is getting an MRI now, and Rapoport and Pelissero report he will seek a second opinion after that scan is complete. This would be a brutal turn of events for a player who spent months in free agency and one who hoped to land an impact deal next year.

This injury occurred when Bryant was running a routine route, Jane Slater of NFL.com tweets. It is believed to have taken place on the final play of New Orleans’ practice, Adam Schefter of ESPN.com reports (via Twitter). It was indeed a non-contact play, veteran reporter Ed Werder tweets.

While the Saints’ injury report lists Bryant as questionable with an ankle malady, that designation could soon change.

The recently acquired wideout was not supposed to be ready to play in the Saints’ Week 10 game against the Bengals, Pelissero notes (via Twitter). The longtime Cowboy was in the process of acclimating to a new system and presumably would’ve been ready to play in Week 11. While the Saints’ machine figures to hum along as it has for years, this may be a late-career-defining setback — if, in fact, Bryant has actually torn one of his Achilles’ tendons — for the receiver.

The Saints ended Bryant’s free agency stay by choosing him over fellow Tuesday-workout participants Brandon Marshall and Kamar Aiken. The former impressed the Saints, per Schefter (on Twitter), and could well be an option if Dez ultimately has severely damaged an Achilles. New Orleans placed Cameron Meredith on IR this week, and if its new acquisition can’t go, only has three healthy receivers on its roster. Meredith followed Saints wideouts Tommylee Lewis and Ted Ginn to IR, though Lewis has since resumed practicing and could be activated soon.

Dez turned down offers from the Ravens — a three-year, $21MM pact — and Browns (worth less than $5MM). He landed a $1.25MM deal with the Saints that contained incentives. Achilles tears represent one of the toughest injuries to overcome, and given the timing of this, Bryant’s rehab would take him into the free agency period. It would undoubtedly affect his market, particularly after the former All-Pro showed signs of decline during his final years in Dallas.