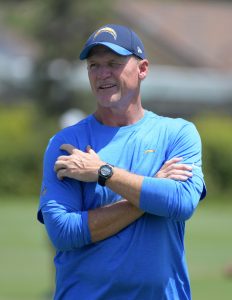 Whisenhunt was initially expected to interview for the Georgia Tech position last weekend, but those plans changed. A new meeting was reportedly set up for this week, but it’s unclear if that summit ever actually took place.

Whisenhunt is in the midst of his second stint as the Chargers’ OC. His first run came in 2013, under then-head coach Mike McCoy. Whisenhunt left to become the Titans’ head coach for one-and-a-half seasons before returning in 2016, and stuck around even after McCoy was fired. This year, Whisenhunt’s offense ranks third in DVOA, fifth in total yards, and fifth in scoring.

Los Angeles is virtually assured of a postseason berth and still has an outside chance at taking the AFC West. The Chargers will close out the season by facing the Bengals, Chiefs, Ravens, and Broncos.