The Chargers are waiving veteran tackle Joe Barksdale, a source tells Ian Rapoport of NFL.com (on Twitter). Barksdale also confirmed the news by tweeting his goodbye to the team and its fans. 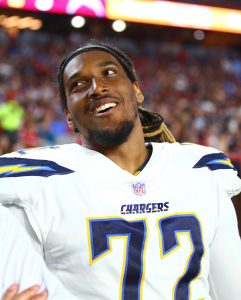 “I just want to take a moment to say thank you to the Chargers organization and all of the true die hard Charger fans,” Barksdale wrote. “Since 2015, this team has been my home and my teammates my family. I will truly miss everyone, but look forward to what the future has in store for me.”

Barksdale, 31 in January, was inactive on Sunday due to a non-injury related issue. He appeared in just six games this season and only two contests in September and October.

Barksdale was a starting tackle for the bulk of his career, but was relegated to a reserve role this year. The league’s other 31 teams will have an opportunity to claim him in the next 24 hours, but that’s unlikely to happen with one more full season to go on his four-year, $22MM deal.

Barksdale saw just 144 snaps this year, his lowest output in years. He did not see enough action to qualify for ranking, but his 62.6 overall score from Pro Football Focus paints him as a below average protector.