Raiders wide receiver Martavis Bryant has been suspended indefinitely by NFL, according to Michael Gehlken of the Review-Journal (on Twitter). Bryant has been fighting a substance abuse suspension for months, but a lost appeal means that he will be out of the game until further notice. 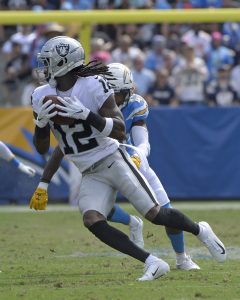 The Raiders have feared this news for quite a while, though team execs have been mum on the subject. It’s fair to say the Raiders regret sending a third-round pick to the Steelers for Bryant earlier this year.

The Bryant trade occurred after the Raiders moved down from No. 10 for the Cardinals’ No. 15 pick, plus third- and fifth-round selections. That third-round choice was shipped to Pittsburgh, bringing Bryant to Oakland. UCLA tackle Kolton Miller has potential and may prove to be a quality first-round selection, but the Raiders effectively threw away a Top 100 selection when they acquired Bryant.

Before the deal, Bryant spent his entire four-year career with the Steelers. His tenure was tumultuous, as he missed the entire 2016 season for violating the NFL’s substance abuse policy. The 26-year-old (27 next week) showed flashes of brilliance early on, including a rookie campaign where he caught eight touchdowns, but the red flags have been long apparent.