The Jaguars interviewed former Vikings offensive coordinator John DeFilippo for their OC position, according to Mike Kaye of NJ.com (on Twitter). DeFilippo also met with the Cardinals regarding their OC vacancy, per 98.7 FM’s John Gambadoro. 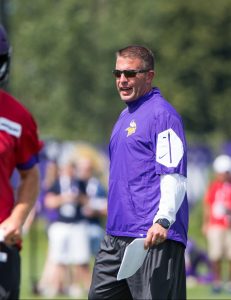 DeFilippo was a hot name in coaching circles after helping to guide the Eagles to a Super Bowl victory last year, but things fell apart for him in Minnesota. As the offense sputtered, the Vikings canned DeFilippo in December, bringing his tenure to a close after less than one season.

Apparently, the brief run in Minnesota has not damaged DeFilippo’s reputation around the league. He didn’t click with Kirk Cousins, but he did get great performances out of Carson Wentz and late season fill-in Nick Foles in 2017. Both the Cardinals and Jaguars could use a quarterback whisperer, and that was likely the basis for DeFilippo’s pitch in both interviews.

In his 13 games as the Vikings’ OC, the club went just 6-6-1. Before his dismissal, the Vikings went five straight games without topping 24 points.