Saints assistant head coach Dan Campbell is not interested in returning to the Dolphins, Armando Salguero of the Miami Herald tweets. Campbell served as the Dolphins’ interim head coach in 2015 and is still highly respected by team ownership, but he apparently does not want to go back down that road. 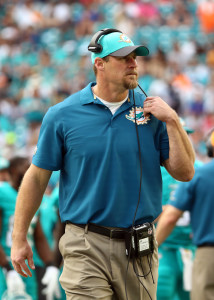 From the sound of it, the Dolphins wanted to speak with Campbell about their vacancy, but they’ll have to concentrate on other candidates instead. That list includes fellow Saints assistant Dennis Allen, Chiefs offensive coordinator Eric Bieniemy, and maybe even current Ravens head coach John Harbaugh.

Campbell, meanwhile, still has a full plate. In addition to prepping for the Saints’ upcoming playoff game, he’ll chat (or has chatted) with the Cardinals, Browns, and Packers.

3 comments on “Dan Campbell Not Interested In Dolphins Return”