The Buccaneers will interview Cowboys defensive backs coach Kris Richard for their head coaching vacancy today, per Albert Breer of SI.com. We already heard that Richard would also be interviewing with the Dolphins and Jets today, so his Sunday will be pretty full. 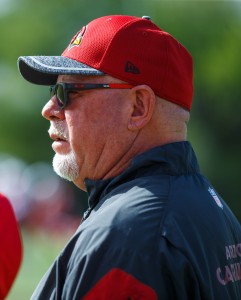 But if Richard is going to land a head coaching gig in 2019, it does not appear that it will be with Tampa Bay. Just yesterday, the team interviewed former Colts and Cardinals head coach Bruce Arians, and reports suggested that momentum was building towards a Arians-Bucs union.

Today, Ian Rapoport of the NFL Network (video link) reports that Arians’ summit with the Buccaneers went very well, and that the 66-year-old could be announced as the team’s next head coach within the next few days. Rick Stroud of the Tampa Bay Times posits that no candidate for the Bucs’ job checks as many boxes as Arians, who has something of a reputation as a quarterback whisperer and who may be able to get the most out of Jameis Winston.

Arians stepped down from his Cardinals post after last season, having guided the club to two playoff berths and three 10-win campaigns. He spent the 2018 season working as a broadcaster with CBS.

If the Bucs do end up hiring Arians, they will not owe the Cardinals any compensation.