Steelers linebacker Ryan Shazier has made tremendous strides in his rehabilitation and wants to continue forward in his recovery with an eye on playing football again, owner Art Rooney says (Twitter link via Ed Bouchette of the Post-Gazette). Shazier’s contract is up, so Rooney says the team would probably have to sign him as a player in 2019 in order for him to do that. 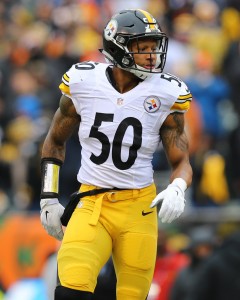 When Shazier was carted off of the field in December 2017, doctors feared that he might never walk again. After months of grueling rehab, Shazier is now able to walk with some assistance. All along, the linebacker has been hopeful about returning to the gridiron.

“There is no ceiling in Ryan’s recovery. He aggressively approaches it every day,” Steelers GM Kevin Colbert said in March of last year. “We support him in every way possible in that endeavor. Where that leads, only he will know and he will determine further down the road. His approach, his mental approach. I can’t tell you how impressive an inspiration he is to us.”

Last May, the Steelers converted $8.26MM of the linebacker’s 2018 base salary into a signing bonus. The move had no cap implications for the Steelers, but it allowed Shazier to collect on the bulk of his pay for the 2018 season immediately rather than waiting for it in increments throughout the year. It sounds like the Steelers are prepared to do right by him once again as he continues on his inspirational journey.