Browns wide receiver Rashard Higgins could receive some significant interest on the open market this offseason, but the young wideout is making it clear he wants to stay in Cleveland. “I want to be in Cleveland, no other team. Tell (John) Dorsey, Tell Lonzo (Alonso Highsmith) to get it done”, Higgins said this week at the Super Bowl, according to Mary Kay Cabot of Cleveland.com. 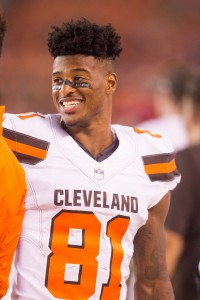 Dorsey, the Browns’ GM, said last week that the team had talked to Higgins’ representatives about a new contract, and it sounds like the interest is definitely mutual. Higgins is only scheduled to be a restricted free agent anyway so the Browns could match any offer he receives from another team, but it doesn’t seem like it’ll get to that point.

Higgins’ agent Michael Swensen told Kay Cabot “we’re getting there”, meaning a deal could be close. The Browns drafted Higgins in the fifth round out of Colorado State back in 2016. They cut him before the 2017 season, but quickly re-signed him. He didn’t do much as a rookie, but showed signs of progress last season before breaking out in 2018.

This past year he caught 39 passes for 572 yards and four touchdowns in only 13 games, and showed a nice rapport with rookie quarterback Baker Mayfield. With Jarvis Landry entrenched in the slot, Higgins should have an opportunity to start outside next year. Higgins sounded excited to help turn around the Browns, raving about Mayfield, new coach Freddie Kitchens, and the organization in his comments to Kay Cabot. At this point it would be surprising if he’s not locked up by the time free agency rolls around in March.