The Buccaneers signed running back Andre Ellington, according to a team announcement. The deal reunites the former Cardinals tailback with Bruce Arians, who has taken over as the Bucs’ head coach. 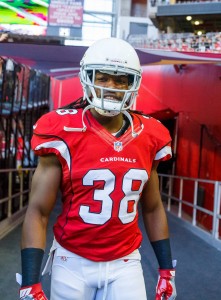 Ellington may have a chance to compete for the club’s third-down back role, a spot that is up for grabs as Jacquizz Rodgers approaches free agency. Ellington was once a regular in Arizona’s backfield, but he was not in football in 2018.

The 30-year-old has a reputation as a solid pass catcher and, at one point, the Cardinals considered transitioning him to the wide receiver position. In 2014, Ellington collected a career-high 46 catches. In 2017, his last NFL season, he had a total of 39 grabs for the Cardinals and Texans.

Ellington was largely overshadowed during his Arizona tenure, but he did average 4.2 yards per carry under Arians. If he can prove that he still has something left, he may have an opportunity to get his career back on track in Tampa.