49ers Did Not Pursue Antonio Brown

The 49ers had interest in trading for Odell Beckham Jr. before the Giants shipped him to the Browns, but they did not go after this year’s other available star wide receiver. In an interview with KNBR, 49ers GM John Lynch said that he did not engage in talks with the Steelers for Antonio Brown. 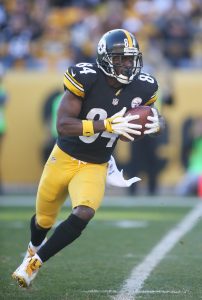 “We took a quick look and then we just said, ‘Hey, we’re not interested in that for our team,’” Lynch said (Twitter link via Matt Barrows of The Athletic). “That’s where we are. I think we feel pretty good about our receiving corps. I know a lot of people don’t share our sentiments.”

Brown, of course, went to the Bay Area’s other NFL team in exchange for third- and fifth-round picks. If Brown reverts to his old form in Oakland, there may be questions about the Niners’ lack of interest in the future Hall of Famer.

Meanwhile, Lynch indicated that the Niners’ possession of the No. 2 overall pick in the draft actually complicated trade talks with the Giants. The Giants were looking to come away with an additional first-round pick for 2019, but the Niners were unwilling to give up their valuable position.

“I think, ironically, the fact that we had the No. 2 pick made it more difficult because they wanted that badly,” Lynch said (Twitter link). “They wanted two No. 1s. And we weren’t willing to part with that. It was too valuable of a pick.”

The Niners, who did not land Brown or OBJ, are set to feature a receiving corps headlined by Marquise Goodwin and Jordan Matthews. There will be opportunities to bolster the WR group in the draft, but there are no prospects that warrant consideration at No. 2 overall.

Given Lynch’s reluctance to part with the No. 2 pick, one can’t help but wonder if the Niners should have given more thought to a Brown pursuit.

17 comments on “49ers Did Not Pursue Antonio Brown”