There were rumors earlier this month about the Bears exploring a trade of running back Jordan Howard. On Thursday, those rumblings were proven true as the Eagles are acquiring the back for a 2020 draft pick, ESPN’s Adam Schefter tweets. 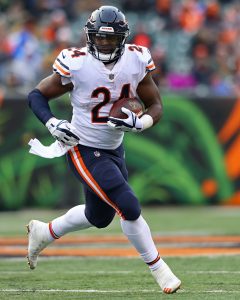 According to Schefter, the pick is a sixth-round selection that could become a fifth-round pick.

In early March, it was reported “multiple teams” approached Chicago about a potential deal for the 24-year-old back and that discussions were ongoing. With less than a month to go until the NFL Draft, the Bears found a taker in the Eagles, who would appear to be out of the running to reunite with Jay Ajayi.

Howard is entering the final year of his contract and will make about $2MM this season. Linked to running backs early in many mock drafts, the Eagles could still land a back in the middle rounds and let him develop under Howard. Like he did in Chicago, Howard is expected to fill first- and second-round duties with Philadelphia, while a collection of Corey Clement, Wendell Smallwood and Josh Adams vie for third-down responsibilities. Obviously, this could change if the team looks to add another back in the draft.

With the Bears, Howard burst on the scene in 2016, finishing second in the league in rushing yards with 1,313 yards and earning a Pro Bowl nod. He again topped the 1,000-yard mark in Year No. 2, tallying 1,122 yards and nine touchdowns. Though trade rumors swirled last season about this time, Howard returned to the team and amassed 935 yards and nine touchdowns on 250 carries, averaging just 3.7 yards a tote.

With the move, the Bears appear to be confident in the one-two punch of Tarik Cohen and the newly signed Mike Davis. Cohen broke out in 2018, tallying 1,169 yards from scrimmage and eight total offensive touchdowns. Davis impressed in limited work with Seattle in 2018, averaging 4.6 yards per carry and tallying 34 receptions.