As expected, C.J. Mosley has generated immediate interest during the legal tampering period. In addition to the Jets’ and Redskins’ interest, a Ravens division rival would like to pry the linebacker away from Baltimore. 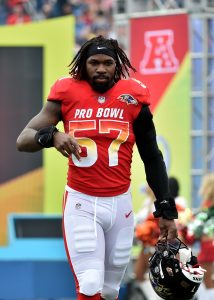 The Browns are in on the Mosley pursuit, according to Mary Kay Cabot of cleveland.com. They hold north of $68MM in cap space and recently released Jamie Collins, though Cleveland — which has Joe Schobert and Christian Kirksey — is not desperate for a linebacker addition. Mosley, however, is far more accomplished than the Browns’ incumbents.

The four-time Pro Bowler may want to reset the market for non-rush linebackers. Collins’ $12.5MM-AAV deal is no longer the standard, and Luke Kuechly‘s $12.4MM-per-year accord tops the market. Of course, with that deal having come several years ago, it would stand to reason Mosley’s camp would want him to top that price.

With Washington having just authorized a safety-record $14MM-AAV pact for Landon Collins, it can be fairly safe to assume that will be the team’s big-money defensive deal. The Browns have far more cap space than the Redskins, but the Jets hold more than both teams. Eric DeCosta said he believed Mosley would be back in Baltimore; that will be a big test for the first-year GM, with the pursuit heating up.