Landon Collins has agreed to sign with the Redskins (Twitter link via ESPN.com’s Josina Anderson). It’s a whopper of a contract: Collins will receive a six-year, $84MM deal with $45MM guaranteed to be paid out over the first three years, according to NFL.com’s Ian Rapoport (on Twitter). 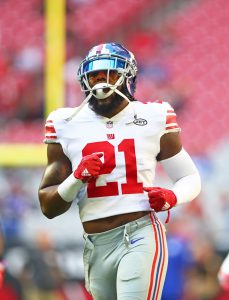 That’s an astronomical figure for a box safety and a huge change from last year’s safety market, which led to disappointing deals for big names such as Tyrann Mathieu. Many feared that the safety market would continue to stall, but things are looking up for the NFL’s last line of defense.

Up until this point, Collins spent his entire career with the rival Giants, a team that did not feel he was worthy of the franchise tag this offseason. Collins clashed with team brass over his contract and threatened to hold out, leading to his exit. The Giants ultimately preferred a shot at a 2020 third-round compensatory pick to keeping one of the game’s most talented young safeties.

Collins, a second-round pick in the 2015 draft, has been a full-time starter for the Giants since entering the league. A two-time Pro Bowler, Collins posted 96 tackles, four passes defensed, and a forced fumble in 2018 while grading as the NFL’s 39th-best safety, per Pro Football Focus.

The Redskins acquired safety Ha Ha Clinton-Dix from the Packers last year, but his status is in limbo as an unrestricted free agent. Collins will solidify a group that has moved on from D.J. Swearinger and might not include Montae Nicholson.