Vinny Curry is on his way back to Philadelphia. The Eagles are nearing a deal with the defensive end, as Zach Berman of the Philadelphia Inquirer tweets. It’s a one-year deal worth $2.25M with an additional $1.25M of upside based on incentives, Ian Rapoport of NFL.com hears (via Twitter). 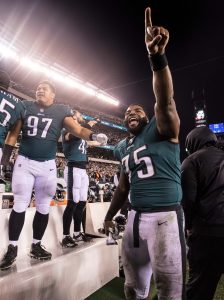 Up until last year, Curry spent his whole career (2012-2017) with the Eagles. Last year, he joined the Bucs on three-year deal, but that contract was terminated when he became a cap casualty in February.

Last year, Curry tallied 21 tackles, 2.5 sacks, seven quarterback hits, and five tackles for a loss, numbers that don’t exactly jump off of the page. However, he was effective at generating pressure with the Eagles in 2017 and started in every game, including the team’s Super Bowl victory, so he could be a difference-maker in Philly.

This time around, Curry projects to come off of the bench in support of starters Brandon Graham and Derek Barnett. He’ll be especially important to the rotation if Chris Long opts to retire.

Before agreeing to sign with the Eagles, Curry visited the Bengals and drew interest from the Giants.