UPDATE, 8:48PM: Manziel will officially be heading to the Memphis Express, according to Mike Florio of ProFootballTalk.com (Twitter link). He’ll be playing for former 49ers coach Mike Singletary in Memphis.

7:14pm: Johnny Football is back. Johnny Manziel has signed a contract with the new upstart league the Alliance of American Football, according to Adam Schefter of ESPN.com (Twitter link). 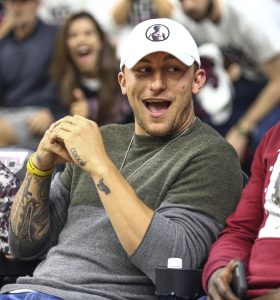 This news comes a little over two weeks after Manziel was released by his CFL team. Schefter writes Manziel has “signed the Alliance of American Football Standard Player Agreement.” The AAF gives every player the same contract, for three years and $250K. It pays $70K in the first year, $80K in the second, and $100K in the third.

In a follow-up tweet Schefter writes that the San Antonio Commanders, the team who held Manziel’s rights based on where he played college ball, passed on signing him. Manziel will now enter the league’s waiver system, which will allow the team with the lowest winning percentage to submit a claim first and so on. The team currently with the lowest winning percentage is the Memphis Express, who currently has former NFLer’s Christian Hackenberg and Zach Mettenberger on the roster.

Manziel was a first round pick of the Browns back in 2014, but flamed out after just two seasons in the NFL. The former Heisman Trophy winner spent a while out of football, but has since been working on a comeback. His time in Canada didn’t go particularly smoothly, and now he’s looking to prove he can still play stateside.

The AAF offered him a workout shortly after he was cut by the CFL, and an arrangement between the two sides always made a ton of sense. Manziel will get a platform to showcase his abilities alongside a bunch of former NFL players as he tries to get back to the league, and the AAF will get a huge boost in visibility and interest.