The Lions have signed free agent wide receiver Danny Amendola, the team announced. Ian Rapoport of NFL.com tweets that it will be a one-year pact with a guaranteed base salary of $4.5MM. The deal also includes incentives that could push Amendola’s earnings up to $5.75MM. 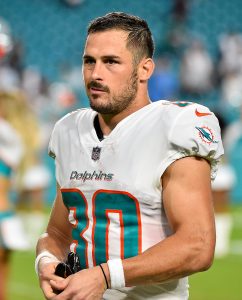 Amendola, 33, was released by the Dolphins a few days ago after one year in South Beach. He posted 579 yards and one touchdown for the Fins, and he should be a solid addition to a strong group of skill players in Detroit. Although there was some mutual interest in a reunion between Amendola and Patriots, Amendola will be reuniting with several familiar faces from his days in New England in head coach Matt Patricia and GM Bob Quinn.

Amendola offers a reliable slot target to complement Marvin Jones and Kenny Golladay on the outside, and he comes at a lower price than other free agent options like Adam Humphries and Jamison Crowder. He is also considerably older and may not have as much upside as either of those players, but the Lions are expected to be very active in free agency and wanted to get out in front of the receiver market, which is expected to once again be quite robust.

Indeed, Jordan Raanan of ESPN.com tweets that the Lions will be players at the top of the pass rush market, which is what they may now focus on after securing a serviceable replacement for Golden Tate, who was traded to Philadelphia last season.