A fast-moving Friday will include Eric Weddle landing with a third NFL team. The veteran safety will sign with the Rams, according to The Athletic’s Jeff Zreibec (on Twitter).

With a “Fear the beard” tweet, the Rams appeared to confirm this transaction. 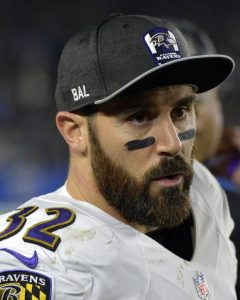 Weddle will join the defending NFC champions, who may now be set to let Lamarcus Joyner walk as a free agent. This is a two-year pact worth $10.5MM and one that could be worth up to $12.5MM, per Ian Rapoport of NFL.com (on Twitter). He will receive $5.25MM fully guaranteed, per RapSheet (on Twitter).

Weddle had a visit scheduled with the Rams and received 11 offers since the Ravens released him earlier this week, and Albert Breer of SI.com tweets Weddle was at the Rams’ facility on Friday. The 34-year-old safety will be the latest addition to a star-studded roster, albeit one that could take some hits in free agency. Joiner is a free agent after playing 2018 on the franchise tag.

A three-time Pro Bowler with the Ravens and a player with six Pro Bowls on his 12-season resume, Weddle will join John Johnson on Los Angeles’ back line. The longtime San Diego Charger is back in southern California. The Panthers and Giants were two of the teams interested in Weddle, according to Joe Person of The Athletic and Matt Lombardo of NJ.com (Twitter links).

The two-time first-team All-Pro initially said he would retire if the Ravens released him but later backtracked on that. Weddle worked against the Rams in scrimmages last summer and will now attempt to be an integral figure on another defense.