After being arrested for the third time in three months, running back Mark Walton has been let go by the Bengals. The team announced that they’ve waived the 2018 fourth-round pick. 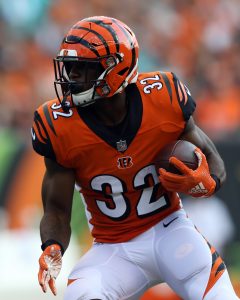 “It’s important for our team to get off to a fresh start as we begin the 2019 season,” said new head coach Zac Taylor. “For that reason, we felt it best if we move forward without Mark Walton. We hope his situation gets resolved, but we don’t want to take anything away from the good work that so many other players have already begun to demonstrate.”

Earlier this week, Walton was cuffed on felony charges of carrying a concealed firearm, resisting an officer without violence, possession of marijuana, and reckless driving in connection with a high-speed chase in March. ESPN’s Katherine Terrell tweets that Walton surrendered to police yesterday. This comes on the heels of two other incidents – Walton was charged with misdemeanor battery after a February skirmish, and he was also arrested for marijuana possession in January.

As our own Zach Links pointed out, Walton seems very likely to face NFL discipline for his off-the-field incidents. This would presumably limit his ability to catch on with another team, at least for the time being.

Despite injuries, Walton showed some serious promise during his collegiate career, including a sophomore season in which he scored 14 touchdowns. However, during his rookie season in Cincy, he had just 14 carries for 34 yards as he played behind Joe Mixon and Giovani Bernard.

Paul Dehner Jr. of the Cincinnati Enquirer notes (on Twitter) that the team could now be searching for some depth at the position, especially considering the fact that Bernard is set to hit free agency after next season. The reporter points to Texas A&M running back Trayveon Williams as an option. Williams had previous success with Jim Turner, who is now the Bengals’ offensive line coach. The running back is expected to be a Day 2 selection.