Browns running back Duke Johnson has requested a trade, but it doesn’t sound like he’ll get his way. In an interview with 92.3 The Fan (Twitter link) on Tuesday, Browns GM John Dorsey indicated that Johnson’s isn’t going anywhere. 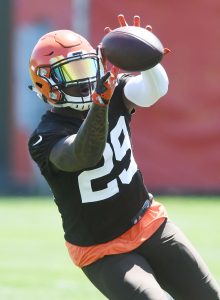 “I keep telling you guys and you all don’t listen to me,” Dorsey said. “Duke Johnson is a viable member of this organization. He’s very talented. This organization has plans to use him.”

Dorsey’s comments jibe with head coach Freddie Kitchens‘ recent remarks, so all indications are that Johnson will be a member of the Browns in 2019.

Johnson, ostensibly, is upset about the arrival of former Chiefs running back Kareem Hunt, who is slated to serve as the Browns’ top ball carrier after the conclusion of his four-game suspension. Meanwhile, the Browns will need a quality ball carrier for the opening month of the season and they still value Johnson’s soft hands out of the backfield. Since 2015, Johnson has averaged roughly 59 catches and 543 yards per season. Even last year when he saw only 40 carries behind Nick Chubb and Carlos Hyde, he still managed 47 grabs for 429 yards.

The Jets, Texans, and Eagles all showed interest in Johnson after Cleveland acquired Hunt, but if Dorsey and Kitchens are to be believed, they’ll have to go shopping for backfield help elsewhere.