Latest On Jets’ No. 3 Overall Pick

Kyler Murray and Joey Bosa have been predicted to head to the NFC West for weeks. If that does not happen, the draft will become captivating from the start. But the Jets are not viewed as likely to have a shot at Bosa. 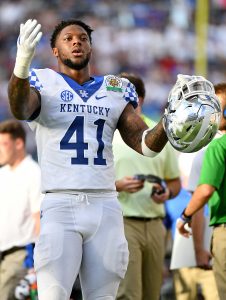 The pass rusher-seeking team, though, may be ready to make a surprise pick at No. 3. Linked to Josh Allen and Quinnen Williams, the Jets instead are believed to be high on Ed Oliver. Jets coaches have been pushing for Oliver, Albert Breer of SI.com notes. This would cap a resurgence for the Houston-honed prospect.

This coincides with NBC Sports’ Peter King indicating the Jets are not enamored with Allen, the player viewed as the next-best edge rusher to Bosa in this draft. Allen improved his stock by coming back for his senior season at Kentucky, and Brian Costello of the New York Post writes the Jets are a bit concerned about the edge prospect being a one-year wonder. He posted 17 sacks as a senior after registering seven apiece in his sophomore and junior seasons.

Oliver announced before his junior season he would turn pro at its conclusion. He only played in eight games in 2018 and finished with Cougars career lows in sacks (three) and tackles for loss (14.5). The 6-foot-2 interior rusher would seemingly be a better fit in a 4-3 scheme, but despite the Jets sticking with their 3-4 look, Gregg Williams obviously has extensive experience using a 4-3.

Of course, this late Oliver rise may be a smokescreen. Those do peak in April. An NFL executive, per SNY’s Ralph Vacchiano, believes this Oliver-Jets buzz is centered around coaxing the Raiders to trade up a spot to nab him. The Raiders — who use a 4-3 scheme — are believed to “love” Oliver, per Costello. However, Vacchiano adds Gregg Williams is indeed pro-Oliver.

4 comments on “Latest On Jets’ No. 3 Overall Pick”